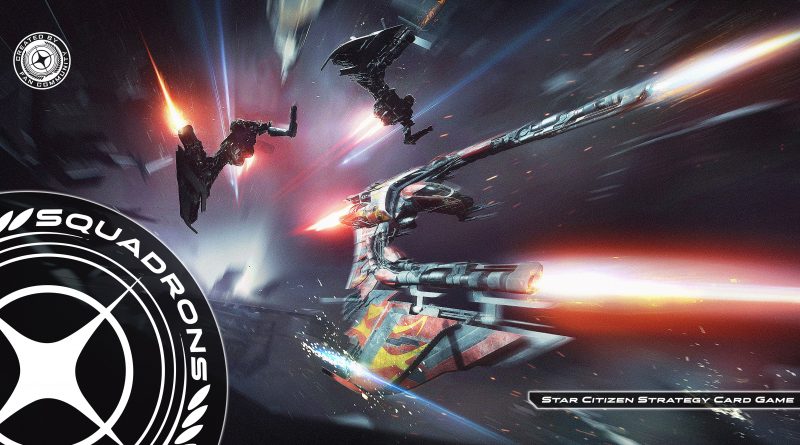 a few months ago we visited the Con42, a Star Citizen fan convention in Mühlheim am Rhein, Germany (not very far from Frankfurt!). While strolling through the halls we noticed a small booth right in front of the large hall where all the panels took place. There, spread out on a small table, we noticed a number of cards with space ships and locations from Star Citizen on them. Our curiosity was sparked so we walked to the table in order to take a closer look. Right in that moment Thomas, the developer of the game, joined and explained to us what the game is about: a Star Citizen card game in the style of games like Magic: The Gathering.
Up to that moment Thomas had our interest, but now he had our attention. Apparently our gaze betrayed us because he instantly asked if we wanted him to explain the game to us. We nodded eagerly and he promptly started: Ships, UEE, Vanduul, locations, hull, shields, attacks, initiative… Soon our heads spun.
One thing was apparent: what this guy built is just genious! A complex and well-developed card game which so far includes two playable factions and a lot of fun.

Thomas told us that for the time being he already has a non-commercial contract with CIG in order to advertise the game. He hopes that if the game gets more popular in the community he can also work on a commercial contract with CIG to officially publish the game. The more support from the community the higher the chances to realize the game together with CIG!

In order to help we sat down with Thomas and asked him a bunch of questions so we could write this detailed report about this amazing project for you.

SCB: What is Squadrons going to be about?

Thomas: Squadrons is a modern, immersive strategy card game with new game elements and focuses. You build your own SQUADRON with your favorite ships from the Star Citizen universe and can lead it into battle in duels and multiplayer matches. Target of the game is to conquer the majority of five contested locations with your squadron. The ships in your squadron can be supported by additional combat and supply cards from your card deck (your squadron). The gameplay features modern elements such as reduced resource management, expanded card drawing, a selectable starting hand as well as first round claiming and tactical but fast space combats. And the random battlefield makes each match unique!

SCB: How did the Squadrons project start?

Thomas: It all started with a monstrous two square meters “Star Wars – The Clone Wars” board game which resulted in a more compact card game spin-off for my son. Then I met my new love – Star Citizen. Around mid-2016 I started developing an ambitious card game for Star Citizen. Two years and more than 500 working hours later you can admire the result.

SCB: What is the current state of the project?

Thomas: Currently there is already a final prototype which consists of two Squadrons (UEE and Vanduul) and a location set (15 different locations) for two players. Basically I’m ready to start right away. There are already strictly limited prototypes in circulation in the SC community for testing purposes.

SCB: How long does an game in Squadrons take on average?

Thomas: A game between two players takes between 10 and 50 minutes. The game is already pretty balanced, therefore matches often take longer rather than shorter.

Thomas: That’s right. The license from CIG was a great gesture and spurred me on once more! Thank you CIG! And well, I am ready for takeoff.

I would introduce the Squadrons card game with a high-quality and limited Founders Edition. This starter set for two players would be the first step and provide important feedback for the future. After that, new squadrons and deckbuilding would be added gradually.
The cards for Squadrons would be produced in the best playing card factory in the world. The whole package will be very exclusive. I am already working on it. My goal is simple: The highest-quality strategy card game ever created!

SCB: Chris Roberts is a great visionary. What is your vision for Squadrons? Which squadrons can we expect?

Thomas: Like Chris, I already have a clear vision for Squadrons, which I would realize in close collaboration with CIG.

From the beginning, Squadrons was designed with modularity in mind. The card game can easily be expanded with new squadrons and new rules. Currently, a pirate squadron is in the pipeline as third faction (you can find teasers on Twitter). I do not want to reveal too much, but they will be able achieve victory points not only in combat but also while doing other odd jobs. Haarrr!

There are so many possibilities when designing a squadron. Currently all squadrons focus on small to medium sized spaceships. Later on I would like to design a capital ships squadron, which has few escort ships, but instead many cards that activate the powerful weapon systems of the capital ships (i.e. heavy turret barrage or devastating railgun shots). Of course, such squadrons play differently and each squadrons has its own charm. Other concepts include patrol, pioneer and bounty hunter squadrons. It will be great!

The feedback of the community has been terrific! I’m so grateful for the support, trust and appreciation the Star Citizen community gave me!

After conquering the second place of all Citizen spotlights within just three months, getting the Staff Pick and being MVP, we unfortunately now have to wait for answer from CIG to take the next steps. Squadrons is also a big step for me personally.

I am ready to deliver you the “Best Damn Card Game Ever” for Star Citizen! #BDCGE

SCB: That sounds really great! Can you show us some cards?

Thomas: Of course, have a look!

Obviously the following card is just an example for the vast selection of cards that are included in Squadrons, so stay tuned for what´s more to come. 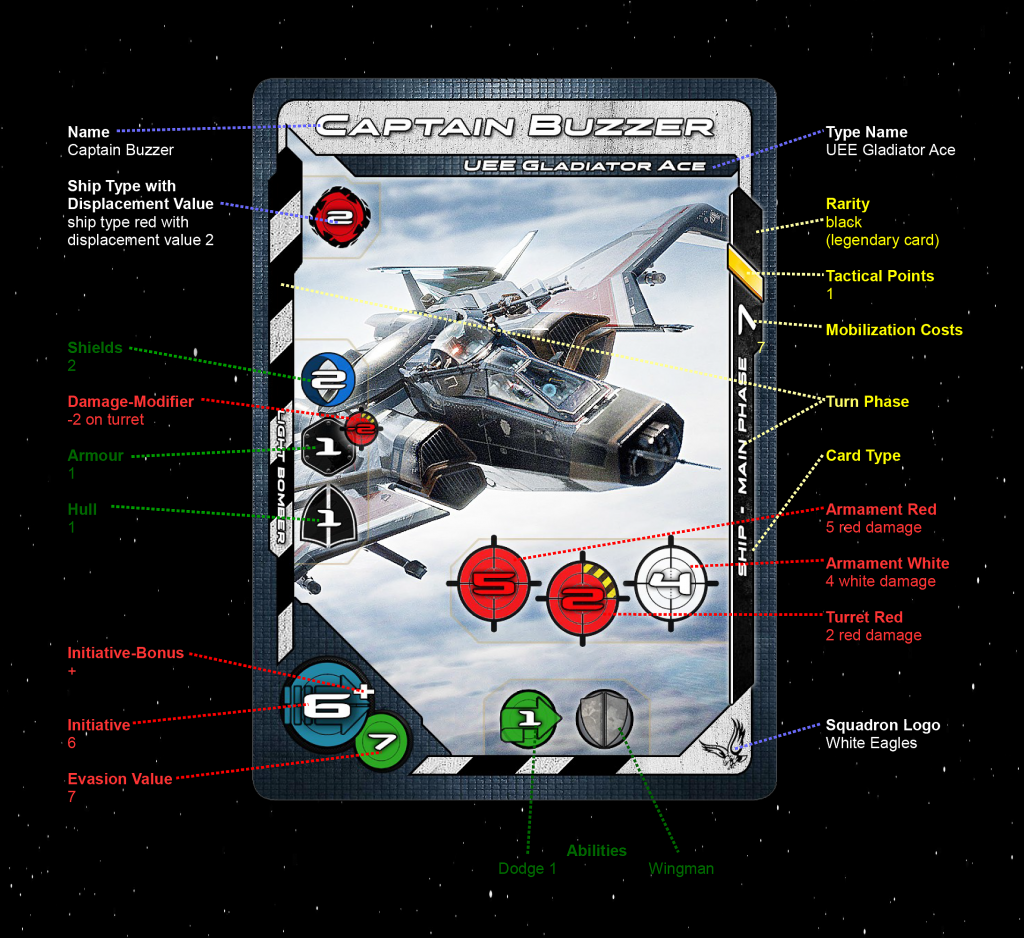 I will roughly explain the structure of a playing card in Squadrons. This is Captain Buzzer, a hero of the 22th UEE Squadron, the White Eagles. Captain Buzzer is a ship card and my favorite hero.

At the bottom left of the card you find the most important value; the initiative. The initiative determines when a spaceship attacks, the higher the better! A spaceship in battle deals damage; the red and white attack symbols below the picture of the ship. Damage affects the toughness value on the left side; the toughness value composes of shields, armor and hulls. If a ship is dealt sufficient damage, it is destroyed.

Combat abilities are listed in the middle below. The Dodge ability gives the ship a corresponding number of evasive rolls against attacks. To dodge an attack, the spaceship must roll a dice equal or less than the dodge value (green arrow and no. 1 next to the shield symbol). If it dodges successfully, the damage of the attack is prevented.

However, there are not only ship cards in your card deck. Your spaceships are supported by additional action cards and tactics cards which can be played in the three phases of a turn.

A Fight in Squadrons 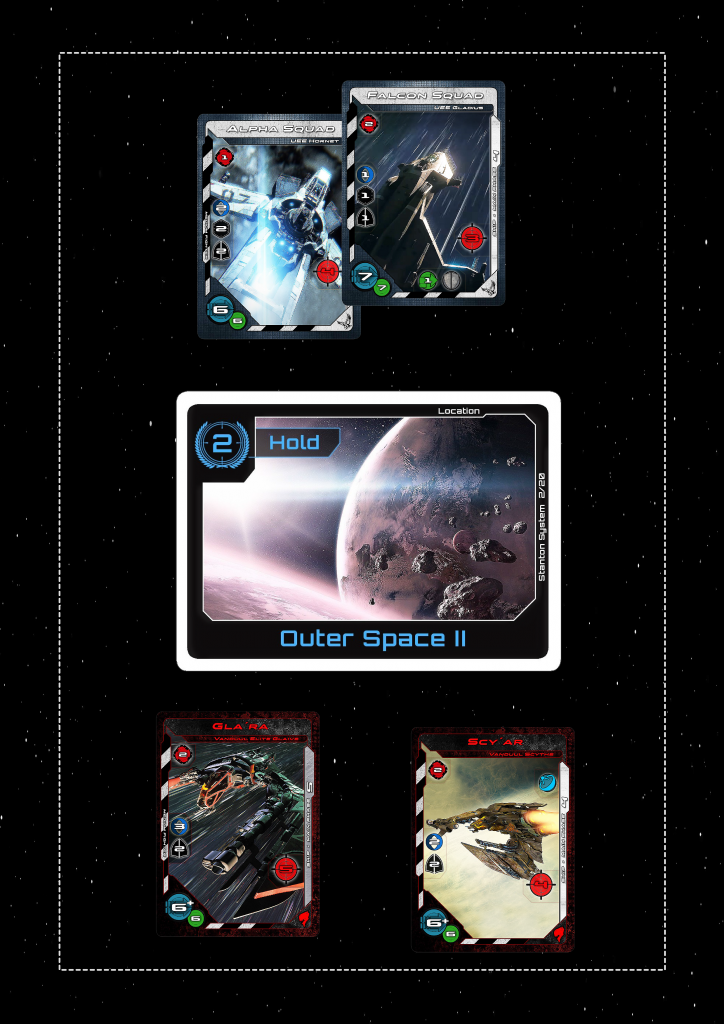 Now I will explain the course of a fight, greatly simplified. In combat phase, two battle groups clash on the location “Outer Space II”. The Vanduul player attacks and aims to conquer this location. In this combat the players won´t use additional combat cards for simplification.

At the beginning of this combat, the UEE player assigns his Falcon Squad Gladius as wingman to the Alpha Squad Hornet. The Gladius is the only spaceship with the Wingman ability in this fight. If the Hornet is now attacked, it´s protected by the Gladius, which will then intercept the attacker.

Now the ships act accordingly to their initiative:

Now you know the basics! However, diverse ships, abilities and combat cards make combats much more complex, unpredictable and exciting.

We thank Thomas for the presentation of this amazing card game at Con 42 and his patient answering of all our questions!

Of course we will keep you up-to-date about this impressive project as soon as Thomas has news for us.

You are looking for more ways to stay up-to-date about the game? Then there are several possibilities:

Thomas thanks you for every kind of support!

You are fans of card games which are easy to learn but hard to master? Then stay tuned for the development of the BDCGE (best damn card game ever)!

“This is an unofficial Star Citizen fansite, not affiliated with the Cloud Imperium group of companies. All content on this site not authored by its host or users are property of their respective owners.”